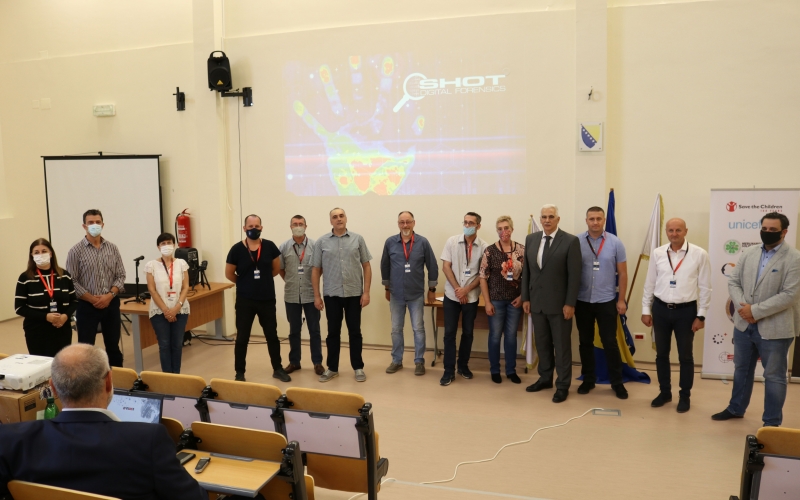 The Agency for Education and Professional Training (AEPTM), CELLEBRITE, an Israeli digital intelligence company, SHOT company from Zenica, Save the Children and UNICEF organized a set of digital forensics training courses on 13 – 31 August 2021. The police officers and civil servants from the Intelligence and Security Agency (OSA),  State Investigation and Protection Agency (SIPA), Boder Police, BiH Federation Police Directorate, Brčko District Police and Ministry of Internal Affairs of Sarajevo Canton and Zenica-Doboj Canton took part in the training courses CMFF-Cellebrite Mobile Forensics Fundamentals, CCO-Cellebrite Certified Operator and CCPA-Cellebrite Certified Phisycal Analyst. These three courses  were conducted according to the curricula developed by the Israeli company Cellebrite, the leading world producer of advanced, innovative and compact systems for mobile device forensics, under the leadership of Roque Goitia from Izrael.

Marko Vujević, AEPTM Director, presented the certificates to the students and expressed gratitude to those who contributed in any way to the organiztion and implementation of the training course. He highlighted the main competences of AEPTM, and added that the organisation of various specialist trainings 'requires the engagement of experts from the country and abroad, which was done in this case'. „ I am convinced that the students who attended these courses will  make use of everything they learned in practice, giving thus support to police and judicial institutions. The Agency will always provide support to the projects like this one. Striving to a recognizable regional centre for complex, innovative and sophisticated education, we will keep our door open for all those who want to work constructively.  Such a serious approach to security problems can contribute to strengthening the foundations of our country's security system ',  Vujević concluded.

Vedran Ključanin, Director of SHOT Zenica, praised the efforts of AEPTM management for supporting the organization of trainings, and thanked Save the Children and UNICEF for providing financial support to the education of BiH police staff.

SHOT is a Zenica-based  company operating for 20 years. In the last ten years the company has been committed to becoming a leader in digital forensics tools  along with the Israeli Cellebrite and Zagreb-based INSIG-2. „This is, hopefully, the beginning of cooperation that will keep growing, with as many as possible digital forensic analysts, as digital forensics is all around us. We all leave 'digital dust' and 2,7 billion mobile phones in the world are just the evidence of that. Our task is to help  our institutions to tackle criminal cases as efficiently as possible, with as much information as possible. And that is what these training courses are meant for.', Ključanin said.

Aida Ivaković, Project Manager of Save the Children, said they had privilege to be a part of the project „Prevention and activities against sexual exploitation and abuse of children in digital environment“, by purchasing forensics equipment, including the organization of this training, the second in a series of education programmes in which 12 police officers  got further education. „ We sincerely hope that this training will contribute to our children being as safe as possible in the digital envirnoment, as they spend more and more time, due to the pandemic as well, in the digital environment It is up to us, adults, to make sure that all children are informed about all risks and threats preying on them in the digital envoronment', Ivković said.

Mario Tokić, a representative of UNICEF, said he hoped that the police officers were satisfied with the education programme, adding that their evaluation would serve for designing further activities aimed at protecting children against violence and abuse on the Internet.

At the end of this education  programme, Goran Oparnica from Zagreb-based INSIG-2 company held a number of presentations about the latests digital forensics trend sin the world.